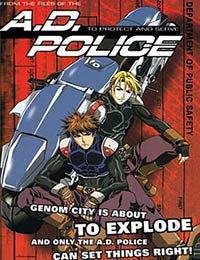 Set a few years before Bubblegum Crisis Tokyo 2040, A.D. Police chronicles the tales of Mega-Tokyo's special police division designed to control rogue Boomers in the city. A.D. Police Officer Kenji Sasaki faces a major dilemna: he loses another partner to a rabid boomer. A day after he's sent off-duty, he receives a new partner in the form of German cop Hans Kleif. Funny thing is that Kenji sucker-punched Hans at a bar the night before. Not only does Kenji face the everyday task of controlling Boomers, he has to learn to adjust with his new partner.